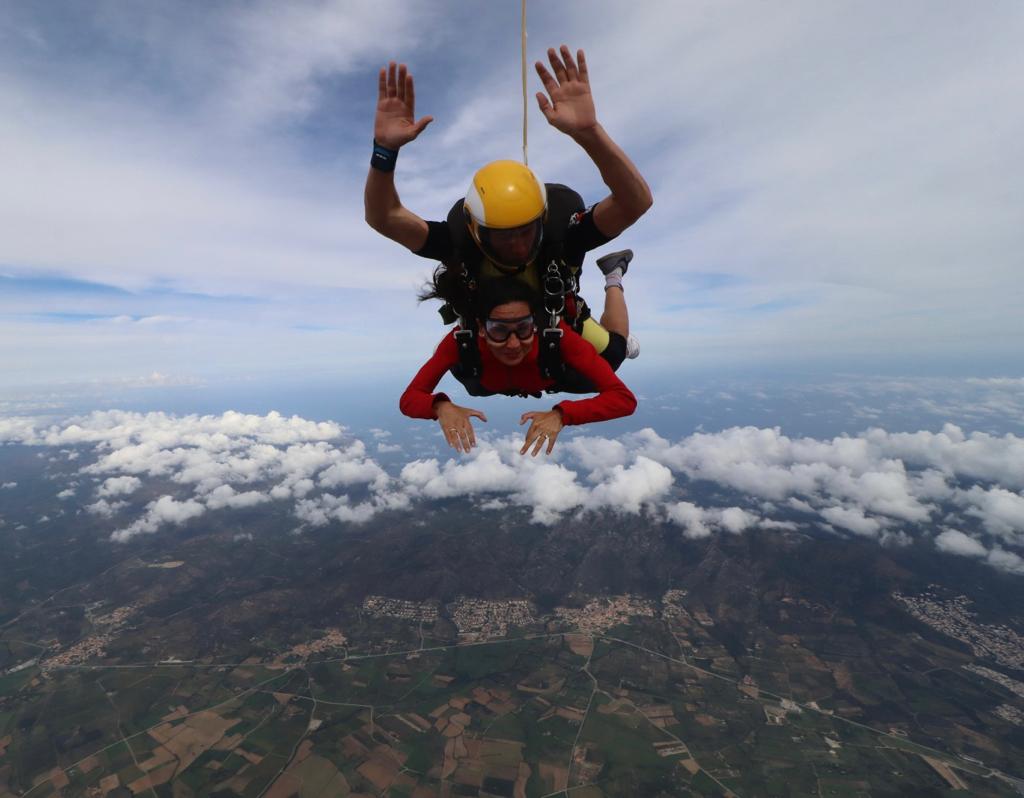 Last week, October 11, 2022, I did one of the craziest, the most insane and perhaps the undoable thing in my life. It was something that I had in mind for a long time but had neither courage nor time to do it. I still cannot believe I did it.  Looking back, it feels like a gap between reality and a memory. Difficult to explain… Imagine a nightmare you breathlessly wake up from, hardly able to distinguish whether it’s real! For sure, mine was not a dream! It was real… What was real indeed, were the shifts in emotions, attitudes, and perceptions towards life, rather than the act itself! Just like a breakthrough, it opened a doorway to stretch my limits, reexplore myself and experience a new sense of freedom.

You must be saying “Come on…. what is it! What have you done?” The truth, even while typing these lines my heart is pounding loudly. What I did really feels abnormal! So… what I did is… I went up to the blue sky -the sky at which any normal person with their feet on the ground would look up; climbed to 4200 meters high and jumped down! That’s what I did; I skydived from 4200 meters! The crucial part is how I did it, with whom, which tools and with which courage… that is a story of its own! I’ll try to explain…Why? Definitely not to show off! The contrary, to share how I felt and what I added to my life as experience. While putting these into words, I come to realize even more… At this very moment (October 16th, 2022; Sunday 12:47), while typing, I still vividly feel and live those moments… And, what impacted me most was not the jump itself; but all that went in my mind and heart, up until I let myself down that plane… Plus the self-reflections I had later…

So… It all happened on a Tuesday morning (October 11th) at a town called Empuriabrava (https://www.skydiveempuriabrava.com/), 1,5 hours’ drive from Barcelona. My husband, daughter and I arrived there, anxious, and unsure about what’s expecting us. After registration we met our instructors with whom each would tandem jump. We put on the equipment, got briefed and headed to the plane. Taking the engine’s hot air onto our faces, we got on board a tiny tube-like propeller plane. We left all our personal stuff at the office. Being always on top of things -in case of emergency- I gave my mom’s number and told the location of our house key to a friend, who randomly had called to ask where we were going that morning… (Reflecting back, I realize the magnitude of the responsibility I put on her shoulders!) Although having made my mind up for the dive, I also texted my ear doctor to ask if there would be any risk from pressure change due to high altitude. By the time the response came, I was on my way up in the sky…

Buckled-up, seated side-by-side, facing one another, in that narrow space, all 15 of us were heading upwards into the sky. Opposite me was my instructor Xavier, my husband on his left and the cameraman to record my jump (out of anxiety, my mind seems to have missed processing and recording his name) on his right; at two of my sides were my husband’s instructor and cameraman… Since we were last to jump, we were by the cockpit. We could see all the flight control panels. Nevertheless, I barely saw anything; my eyes were looking; but the mind simply wasn’t processing; all I knew my heart was about to pop out! My daughter, that was to jump first, was sitting at the other end of the plane, by the exit. I could hardly see her face across the 8-10 heads between us. She too was excited! Hers was a different kind; mixed with courage and youthfulness…

On our way up, we were chatting about this and that… Everything was getting smaller and smaller, out of the tiny window behind me. I could see lands, clouds, just like the scenery I am accustomed to see from a Turkish Airline flight. But neither I nor my gazing eyes and feeling heart were the same. The instructor next to me showed the altimeter and said, “we are at 1500 meters, we’re heading up to 4200 meters, we still have more to go.” In half shock I asked myself “Gooosh… what the heck am I doing here… what the hell are we doing?” and turned back to him and said, “just remind me not to do this again!” That, in fact, was a message I was telling myself! Later my husband said that my face was as white as a wall!

In between all these, suddenly, I gave a pause! I decided to clear myself from these fuzzy emotions and thoughts; by inhaling, taking deep breaths… by letting myself notice the reason me being there… by searching inside myself, cognitively being aware and reflecting to myself. And I realized that this was one of the things I wanted to do -like a Bucket List*- my entire life, and here I was to do it. This was my conscious choice and free will to be there… I was there because I truly wanted to have the experience, despite the enormous fear and anxiety. I was determined and I wanted to enjoy it!!!

Finally, the time has come. We, the tandem jumpers, began getting prepared; in a kangaroo-like manner, each got attached to his instructor, straps firmly and safely connected, finally were ready for the jump. Exit door opened and there was my daughter ready to go… I placed a kiss on my palm and blew it towards her. She, catching the kiss with her palm, placed it on her chest -her heart! Doing the same, she too sent me a kiss. Then…. Hoop, she jumped!  There was neither anxiety nor fear, but I felt mere joy and happiness! Through a flashback, I went back 18 years in time; to the day she was born, the moment I had her in my arms; when she was a tiny, naïve, and vulnerable baby… All of a sudden, watching her jump out of the plane felt like rebirth; becoming a grown up mature young woman, who is smart and skillful, knowing herself and being in charge of her life. That was the moment I realized; my daughter grew up!

While busy thinking about all these, all solo divers had jumped, and it was our turn… Standing by the exit, facing the -10 degrees freezing cold, I turned to my husband and said “bye…” My cameraman had already jumped and up in the air he was waiting for me! I took a deep breath, looked down and thought “this is it, just enjoy!” Xavier and I made that small leap and began going down in open air at full speed. Like birds… flapping our arms, as if flying or swimming in the air and were whirling round and round for a minute or so… “Shirli, this is real… you are free falling…” (Actually, we were falling down, in full speed!) I thought, “…and you, were about to kill this experience with your fear and anxiety!”

It was an amazing experience. At the end of that one-minute Xavier pulled the shroud line to open the parachute. Going down in full speed, we instantly began bouncing upwards, and floating up in the air. For another five minutes or so we fluttered down, slowly making our way down, making rounds… Apart from the magnificence of the scenery beneath my feet; conceiving the reality -of me and my white Nikes floating in the air in that scenery, was even more amazing. No words to describe this sensation! I flew like a bird and was about to land. Fear would be inevitable, as this was a totally an unfamiliar experience… But the urge to enjoy the moment and take the best of its marvels just outnumbered the fear. This was, what one may call adrenaline at its peak! When we landed back at the initial point, I felt no fear, anxiety, or excitement. Instead, there were a lot of new revelations, pieces of awareness, and loads of emotions and thoughts… 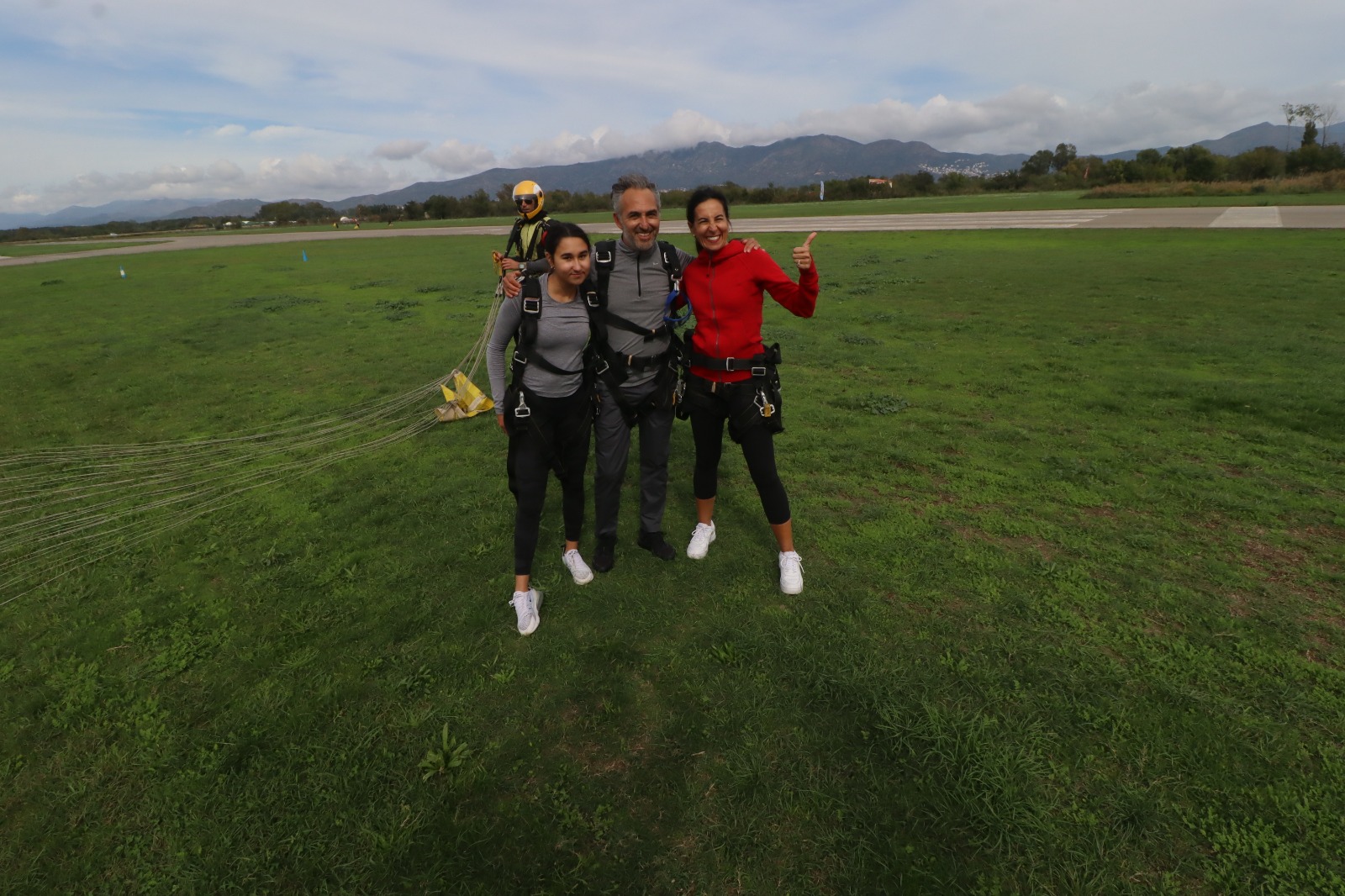 I noted some of my takeaways below…

*Bucket List is derived from the expression kicking the bucket that means dying. It was proposed by the scenarist and film director Justin Zackham, in 1999, by adding the word list as reference to realizing one’s dreams before death. In 2007, he directed his film with the same title Bucket List, starring Jack Nicholson and Morgan Freeman. Perhaps the film and its title has inspired many to realize their dreams before death.

Regardless… A True Story!

Why Writers Write?
Scroll to top